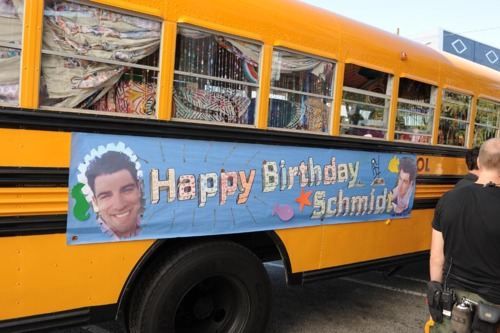 This podcast covers New Girl Season 1, Episode 10, The Story of the 50, which originally aired on January 17, 2012 and was written by Luvh Rakhe and directed by Troy Miller.

It’s Schmidt’s 29th Birthday and his birthday party isn’t going exactly to plan. Jess doesn’t want Schmidt to feel down so she plans a surprise Birthday Party on a party bus for Schmidt and his friends and the party has its share of interesting moments. We also meet Nick’s new girlfriend, Julia, who is a lawyer with some hidden anger management issues.

This episode had a bunch of “Schmidtisms” but we explored Schmidt “turning TWENTY-NINE” and our favorites around Schmidt making an omelette and walking in wearing a muscle tank top and his hat sideways. We discuss how Nick and Julia do Bill Cosby impressions, Benjamin calling Nick N-Word, Benjamin’s forceful approach to trying to sleep with Jess, and Benjamin’s fat-shaming of Schmidt as part of this week’s “Not in 2020”. We also give a quick look into Matt Besser and David Neher, the Guest Stars we feature in this episode.