Who else but Jess would put on an Elvis costume an

"And he was so mean to cabbies in such a cool way. 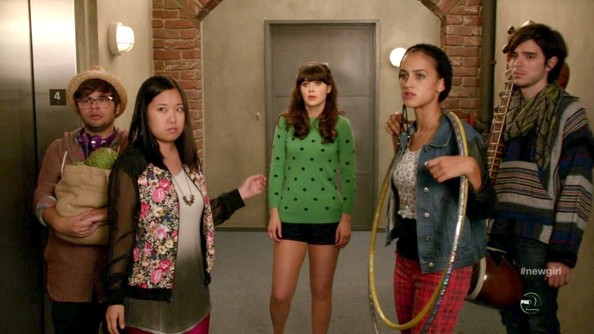 This podcast covers New Girl Season 2, Episode 4, Neighbors, which originally aired on October 9, 2012 and was written by Berkley Johnson and directed by Steve Pink.

This episode, the loft gets some new younger neighbors and while Jess and Schmidt try to be friends with them, they worship Jess and hate Schmidt. Meanwhile, Nick feels compelled to “break” Schmidt and make him feel like he’s old which he does through pranking him. Winston is realizing what more he wants out of life and makes a career change.

We also cover Schmidt’s happiness that the neighbors don’t hate him because of his age but rather his personality as our “Schmidtism”. In the “In the 2020s” section, our “not” was how Schmidt dismissed Nick as a professional because he wasn’t wearing a suit and our “yes” was how the loft were good friends including Schmidt encouraging Jess to follow her passion of teaching and the loft encouraging Winston with his job. We also give a brief look into the careers of Charlie Saxton (Chaz), Morgan Krantz (Fife), Jinny Chung (Sutton), and Jasmine Di Angelo (Brorie), the guest stars of this episode.

Also in this episode were the following guest stars who we do not discuss in the podcast: Stone Eisenmann (Young Nick) and Jordan Fuller (Young Winston).

On this episode, we discussed actuarial life expectancy and shared our results from this quiz which we took for fun. We also discuss Schmidt and Nick’s ages being inconsistent through the show so far as well as top pranks within movies listed on this article and youtube link. Lastly, we also mention how Zooey Deschanel has made a guest appearance on the show Frasier who Jess does an impersonation of in the beginning of the episode.

This episode got a 7/10 Rating from Kritika and a 7.5/10 from Kelly and we both had the same favorite character again: Nick!