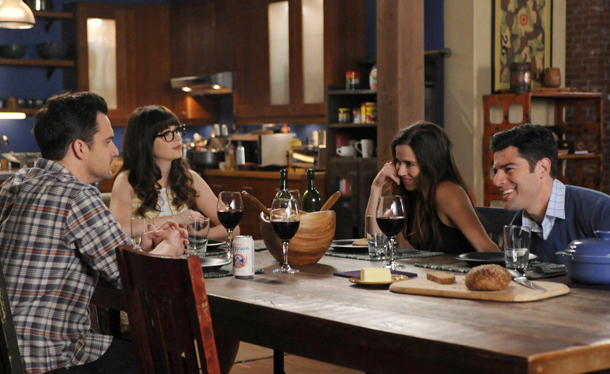 This podcast covers New Girl Season 3, Episode 17, Sister II, which originally aired on February 25, 2014 and was directed by Bill Purple and written by Ryan Koh and Luvh Rakhe.

Abby has been staying at the loft and driving Jess crazy. Jess hatches a plan to make her sister think that moving out on her own is a good idea, but Nick gets stuck watching her while Jess schemes. Meanwhile, Coach helps Winston work out his nerves about his LAPD test results.

In this episode’s “Most Likely To”, we cover which one of us is most likely to freak out and avoid checking results, not check the back of the form, play sky knives, and be the office troublemaker. We also cover Schmidt figuring out with Nick how to talk Abby off of the car as our “Schmidtism”. For “Not in the 2020s” we discuss how Coach didn’t respect Winston’s boundaries, the way Winston was played off as “dumb”, and his statements like how “women shouldn’t be allowed to handle money”. For “Yes in the 2020s” we cover Coach’s pep talk. We also give a brief look into Rodney To (Manager), the Guest Star of this episode.

Also in this episode were the following guest stars who we do not discuss in the podcast: Linda Cardellini (Abby – Previously Discussed in S3E16), Jack Laufer (Broker), Garret Davis (Cop), Gwen Van Dam (Docent), and Ashley Wood (Steph).

We also mention how this is the last time the long version of the theme song is used in the entire show. Neither Kelly nor Kritika found the bear this episode.