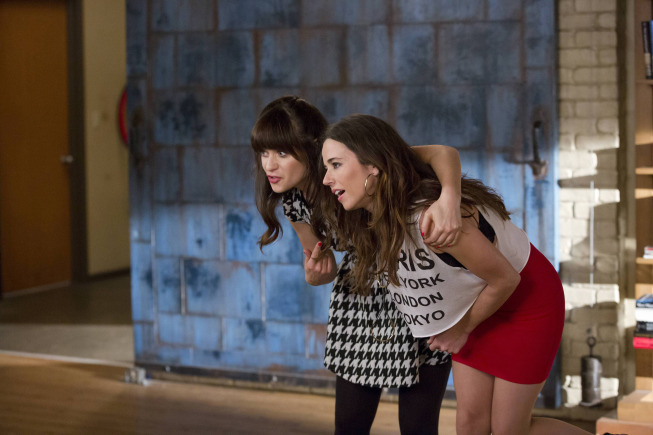 This podcast covers New Girl Season 3, Episode 16, Sister, which originally aired on February 11, 2014 and was directed by Max Winkler and written by Matt Fusfeld & Alex Cuthbertson.

Jess has to go pick up her sister and is desperate to keep Abby and Nick apart. Meanwhile, Bertie’s having a dinner that the whole loft is invited to and Schmidt tries to hook up with his rabbi’s daughter.

For our Most Likely To segment, we discuss which one of us is most likely to show up unexpectedly to a family member’s place, make 10-11 soups for dinner, be a wingman, and order food to someone else’s room. We also cover the Shabbat-hello as our “Schmidtism” this episode. We explore the careers of Jon Lovitz (Rabbi), Linda Cardellini (Abby Day), and Allyn Rachel (Rachel), the Guest Stars we feature in this episode.

We also cover Jess not having the perfect driving record that she mentions in this episode, the goof when Jess’ sister taps her empty wine glass and suddenly her glass is full, and we finally found the bear when Jess said “I didn’t put the cap back on the honey bear”.

Throughout this episode, we found these references to the Jewish faith:

This episode got a 7/10 rating from Kritika and 7.5/10 from Kelly and we both had the same favorite character: Nick!