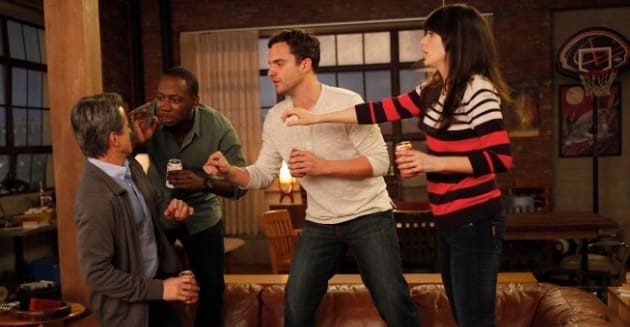 This podcast covers New Girl Season 1, Episode 20, Normal, which originally aired on April 10, 2012 and was written by Luvh Rakhe and directed by Jesse Peretz.

After spending a week at Russell’s, Jess invites Russell to stay overnight at the loft and encourages the guys to act “normal”. They play True American but ultimately the overnight leads to Jess and Russell’s first fight. Winston decides to leave nannying and gets a job at a radio station but finds it is not what he thought.

Our “Schmidtims” this week are when Nick and Schmidt fight about “Real Apps” and Nick’s amazement about Schmidt’s alternate name for Basketball. For “Not in 2020” we discuss Russell shushing Jess and the way Winston’s nannying is dismissed as “not a real career”. We also explore the careers of Blake Garrett Rosenthal, Rizwan Manji, and Kareem Abdul-Jabbar, the guest stars of this episode.

In this podcast we also talk about how to play True American and you can find a compilation of all the True American scenes throughout the series as well as rules below:

Thanks for listening and stay tuned for Episode 21!