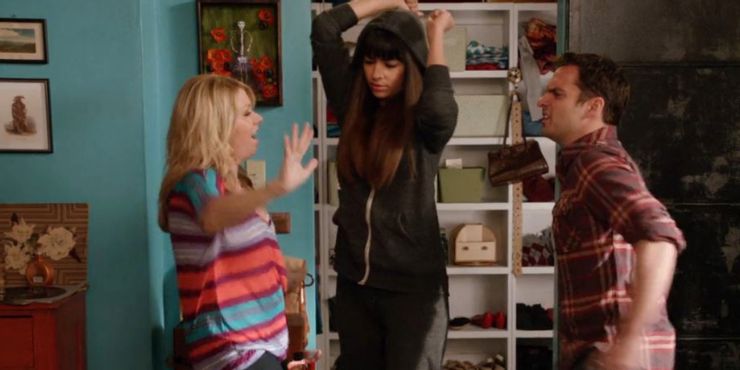 This podcast covers New Girl Season 1, Episode 23, Backslide, which originally aired on May 1, 2012 and was written by David Quandt and directed by Nanette Burstein.

Jess is upset about breaking up with Russell and after learning about the term “backsliding”, she sleeps with an ex. Nick is still pursuing his relationship with Caroline even though the loftmates are advising against it. Schmidt’s still dealing with his broken penis and meets Cece’s grandmother while Winston gets drunk with his boss and ends up with a new accessory for everyone to make fun of.

We also cover a “Schmidtism” when Schmidt tries to cheer Jess up at the beginning of the episode. For “Not in 2020” on this episode we discuss how Cece’s dressing down to avoid discomfort for Schmidt was compared to dressing like a “women’s study major”. We also discuss how Paul called Winston “Washington” and Jess referred to Jenn as “Asian me” and herself as the “Caucasian you”. We also explore the careers of Phil Hendrie, Melissa Tang, and Madhur Jaffrey, the guest stars of this episode.

This episode got an 8/10 Rating from Kritika and Kelly and we both had the same favorite character: Jess!

Thanks for listening and stay tuned for Episode 24!