What did you think of the dynamics between Robby,

While this was handled so maturely, who else was S

It may not be #Halloween right now but it IS Hallo 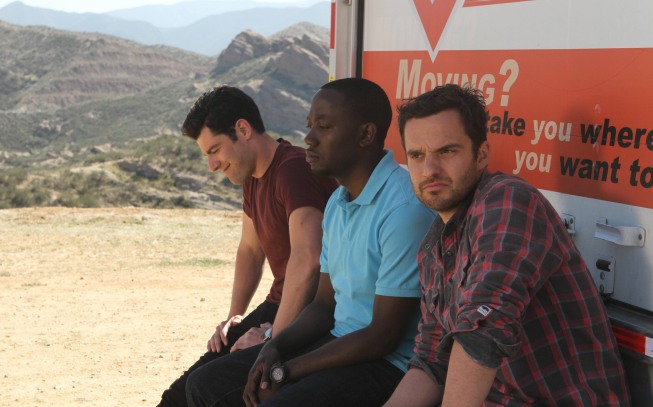 This podcast covers New Girl Season 1, Episode 24, See Ya, which originally aired on May 8, 2012 and was written by Elizabeth Merriweather and directed by Michael Spillar.

Nick is moving out to live with Caroline, but he gets cold feet and drives to the desert instead and throws his keys into a canyon in a moment of nervousness. Jess and Cece drive out to help them but then Jess throws her keys to keep Nick from going back to Caroline. The gang spends a night together in the desert and work through good and tough parts of their friendship.

Lastly in Pop Culture, we wanted to provide more info on White Fang! In the famous New Girl scene, Schmidt “white fangs” Cece, trying to let her go to “set her free” and be happy. This moment only happens in the movie as the wolf, White Fang, never leaves in the book but Schmidt puts his own spin on how to “white fang” Cece.

We also cover the White Fang scene as our “Schmidtism” this week. For “Not in 2020” on this episode we briefly discuss Jess continuing to act like she knows best for everyone. We also explore the careers of Mary Elizabeth Ellis, Thomas Lennon, and Matthew Stephen Smith, the guest stars of this episode.

Thanks for listening and stay tuned for our Season 1 Recap in 3 weeks!