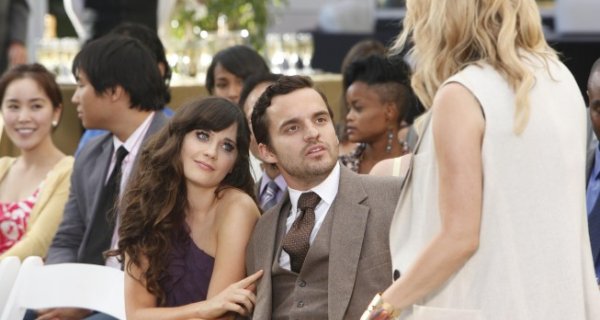 This podcast covers New Girl Season 1, Episode 3, Wedding, which originally aired on October 4, 2011 and was written by Donick Cary and directed by Jason Winer.

The episode starts off with Nick and Schmidt getting Jess dressed to pretend to be Nick’s girlfriend at the wedding of one of their friends. Winston’s the usher and gets into a fight with an 8 year old while Jess does so great at pretending to be Nick’s girlfriend that he uses Caroline’s jealousy to try and get back with her. Schmidt spends the episode pretending to be sober to hook up with someone he has liked since college but it doesn’t pan out. Eventually Nick finds out that Caroline has a boyfriend and gets really drunk but Jess convinces him to move on and they dance it out.

We also cover a “Schmidtism” when Schmidt is telling Jess what people should think when they looked at her in this wedding. For “Not in 2020” on this episode we discuss “Fat Schmidt” and how Schmidt thinks he should “deserve someone like Brooke” and how he wanted to “sit Indian style” with her. We also talk about how the guys tell Jess to “Suppress the Jess”, the little kid who wouldn’t take no for an answer leading to a Jess sandwich and how everyone should be able to cry listening to whatever music they want. We also explore the careers of Katie Cassidy and Natasha Lyonne, the guest stars of this episode.

This episode got a 6/10 Rating from Kritika and 7.5/10 from Kelly and we both had the same favorite character: Jess!

Video Link for Full Theme Song with Behind the Scenes: