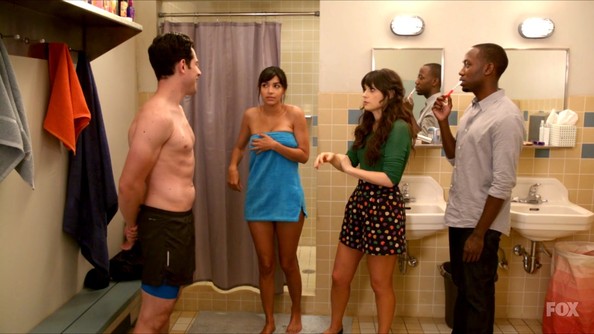 This podcast covers New Girl Season 1, Episode 5, Cece Crashes, which originally aired on November 8, 2011 and was written by Rachel Axler and directed by John Hamburg.

Cece breaks up with the DJ she’s been seeing and crashes with Jess for a few days to avoid going home and seeing her ex. She points out that she thinks Nick likes Jess because his feet point at her when she’s talking and when Jess realizes this she freaks out. Winston and Schmidt both are interested in Cece and she runs them in circles to get her approval before apologizing and ends up holding hands with Schmidt.

Additional Pop Culture References from Schmidts list of things he “loves” about India are:

We also cover “Schmidtisms” when Schmidt was on the phone call with a “girl” to impress Cece and another was Jess’s description of Schmidt and his reaction. For “Not in 2020” on this episode we discuss Schmidt and his kimono, Schmidt in his pursuit of Cece, and the representation of Eduardo on the episode. We also give a brief look into Edin Gali, the Guest Star we feature in this episode. Some of his upcoming films include 60 Minutes to Kill, All-Star Weekend, Killing Angels, and The Road Home.

This episode got a 8/10 Rating from both of us but Kritika’s favorite character was Jess and Kelly’s was Winston.

Additionally, here’s the type of TikTok video Kelly was referencing in regards to the “BirdCat”