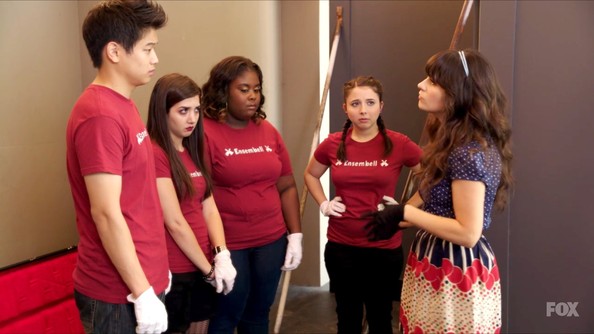 This podcast covers New Girl Season 1, Episode 7, Bells, which originally aired on November 29, 2011 and was written by Luvh Rakhe and directed by Peyton Reed.

Jess takes over the apartment with a group of kids she’s conducting in a handbell performance. Winston joins in because he finds out that he’s good at it and isn’t being mentally stimulated in other areas of his life. Nick and Schmidt fight over money and their differences in hiring someone to do a job versus doing it yourself, highlighting differences in their perspectives.

We also cover “Schmidtisms” such as how Schmidt refers to the sushi he’s eating and the fight he and Nick have about his “Lotusberry Relax” conditioner. For “Not in 2020” on this episode, we discussed how it was wrong of Nick to say that Winston would never have sex again if he played the handbells. We also explore the careers of Raven Goodwin, Esther Povitsky, Ki Hong Lee, and Tiffany Ariany, the kids who were guest actors on this episode.

We also discussed the Asian Bachelorette when speaking about Ki Hong Lee, and you can watch this short here:

Thanks for listening and stay tuned for Episode 8!