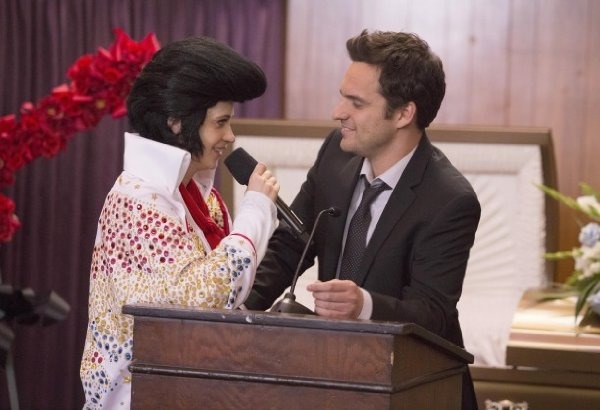 This podcast covers New Girl Season 2, Episode 20, Chicago, which originally aired on March 26, 2013 and was written by Luvh Rakhe and directed by Jake Kasdan.

When Nick finds out his dad died of a heart attack, the whole loft goes to his funeral that Nick has to plan. Jess tries to help and support him while drawing the line at writing Walt’s eulogy. Meanwhile, Winston helps Schmidt get over his fear of death and open caskets.

We cover Schmidt’s breakdown over the middle-class button system and death as our “Schmidtism” this episode. For “Not in the 2020s” we discuss how Nick’s mother asks Jess if “she is a Spanish” and refers to Schmidt as “Fat Schmidt”. In our “Yes in the 2020s” we talk about how everyone in the loft came to the funeral with Nick, Jess putting on the Elvis costume, and Schmidt’s “eulogy” to Winston. We also explore the careers of Margo Martindale (Bonnie), Bill Burr (Bobby), and Nick Kroll (Jamie), the guest stars of this episode.

Also in this episode were the following guest stars who we do not discuss in the podcast: Eric Edelstein (Elvis), Ellen Albertini Dow (Aunt Ruthie), Lila Lucchetti (Deann), Emily R. Wilson (Carol), and Kai Caster (Cousin).

We also discuss how Dennis Farina, who plays Walt, passed away 3 months after this episode aired and how this was Ellen Albertini Dow’s last television appearance before she passed in 2015 at the age of 101. We also share this article (which contains spoilers) where we learned that they knew this episode was always going to be part of Season 2 but that this was supposed to be earlier in the season and would be the first kiss for Nick and Jess. This episode also had an initial cut of 43 minutes and a lot of the improv with Nick Kroll, Bill Burr, and Jake Johnson had to be cut to make the episode time. On the podcast, we also mention the following articles where Mac Davis did an interview about his song “In the Ghetto” and Zooey Deschanel’s time on Conan where she talked about how she prepared for the Elvis impersonation.

This episode got an 8/10 rating from Kritika and a 7/10 from Kelly and we both had the same favorite character: Jess!

Thanks for listening and stay tuned for Episode 21!