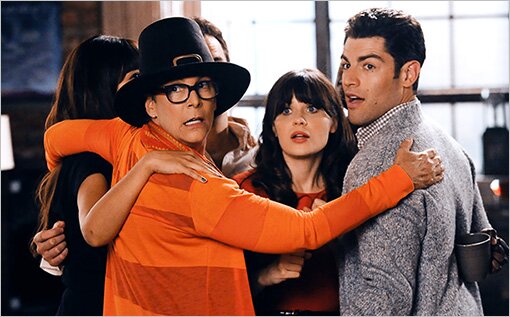 This podcast covers New Girl Season 2, Episode 8, Parents, which originally aired on November 20, 2012 and was written by Ryan Koh and directed by Jesse Peretz.

It’s Thanksgiving again and Jess’s divorced parents are coming to the loft along with Schmidt’s cousin who is also named Schmidt. Jess tries to get her parents back together while Schmidt begins competing with his cousin about who’s more manly.

We cover Schmidt and Big Schmidt’s “all day” dialogues as our Schmidtism. The masculinity contest in this episode kinda blurred the lines between the “not” and the “yes” for our “in the 2020s” section including not allowing Winston to consent to the kiss at the end of the episode as a “no”. Our other “yes in the 2020s” included normalizing self-prioritization (how Jess’s parents didn’t get back together and are happier that way) and your parents’ relationship status doesn’t dictate your own relationships. We also explore the careers of Jamie Lee Curtis (Joan), Rob Reiner (Bob), and Rob Riggle (Big Schmidt), the guest stars of this episode.

Also in this episode were the following guest stars who we do not discuss in the podcast: Matthew Jacob Wayne (Young Schmidt) and Michael Chey (Young Big Schmidt). We previously discussed Lauren Dair Owens (Young Jess) and Ariela Barer (Young Cece) in S2E5 Models.

We also discussed Jamie Lee Curtis’s website My Hand In Yours™ and how despite Schmidt saying he couldn’t kiss Winston because he was a man, he had previously fredo-kissed Nick many times.