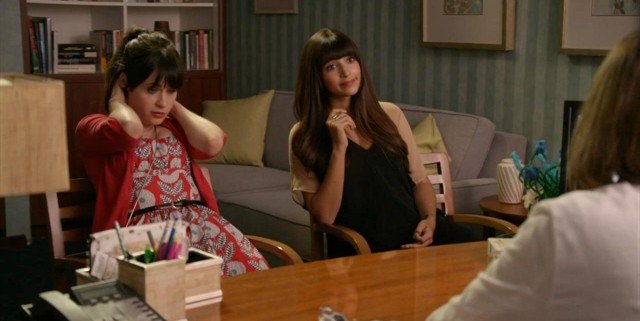 This podcast covers New Girl Season 2, Episode 9, Eggs, which originally aired on November 27, 2012 and was written by Kay Cannon and directed by Neal Brennan.

Sadie and her wife Melissa are visiting for dinner and share that they are pregnant and also that women lose 90% of their eggs by the time they hit 30. This gives Jess much anxiety while Cece is less concerned and they both take fertility tests. Meanwhile, Nick is committed to writing his novel Z is for Zombies and Schmidt learns he may need a little more in bed despite his self-proclaimed va-genius status.

We also cover a “Schmidtism” when Schmidt is trying to get advice from Sadie and set up an appointment with her. Our “not in the 2020s” was how the episode qualified Sadie and Melissa having a “lesbian” baby and our “yes in the 2020s” was Schmidt’s support of Nick’s constant misspelling of the word “rhythm” and the loft all listening to Winston reading Nick’s book aloud. We also give a brief look into Kay Cannon (Melissa), the Guest Star we feature in this episode.

Additionally, while we are not doctors, we did take a look into whether the age 30 was when women lost most of their eggs and referenced these two articles: For Women Who Want Kids, ‘the Sooner the Better’: 90 Percent of Eggs Gone By Age 30; A Breakdown of the Fertility Timeline.

Thanks for listening and stay tuned for Episode 10!