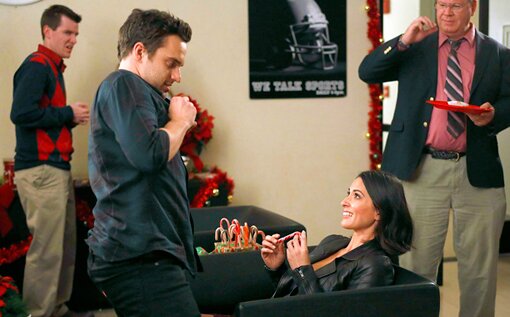 This podcast covers New Girl Season 2, Episode 11, Santa, which originally aired on December 11, 2012 and was written by Luvh Rakhe and directed by Craig Zisk.

When the loft realizes everyone is headed to celebrate the holidays separately, they try to maximize their time by attending multiple Christmas parties! At the parties, Jess gets a surprise visit from Sam, Winston deals with a cranberry stuck in his ear, Nick and Angie get to the next level, and Cece is trying to show Schmidt she’s still his friend.

We also cover some of our favorite lines like Schmidt saying “bah humbug” to Cece and how he described Christmas as “White Anglo-Saxon Winter Privilege Night” as our “Schmidtisms” this episode. For our “not in the 2020s” we discussed how Schmidt mansplained lapdancing to Angie and wanting to hook up with a “fatty in an elf costume” as well as the continuation of Schmidt’s approach to Cece’s culture and Nick rationalizing Angie’s job. In our “yes in the 2020s” we discussed the loft hiding Jess and later when she stood up for herself with Sam. We also give a brief look into Jeris Poindexter (Santa/cop), the Guest Star we feature in this episode.

Also in this episode were the following guest stars who we do not discuss in the podcast: David Walton (Sam – discussed on S2E3), Olivia Munn (Angie – discussed on S2E10), Paul Grace (Security Guard), and Edward Hong (Male Night Nurse).

Additionally in the podcast we mentioned how the cop who stopped the loft mates had a badge that said “Nicholas” on it and how Nick has many nightmare situations.

Thanks for listening and stay tuned for Episode 12!