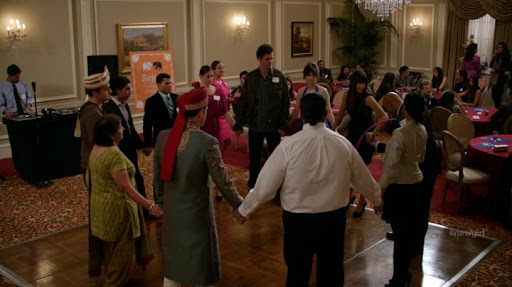 This podcast covers New Girl Season 2, Episode 16, Table 34, which originally aired on February 5, 2013 and was written by David Iserson and directed by Tristram Shapeero.

After Jess and Nick kissed in the last episode, both of them are feeling awkward and we get to watch them deal with the aftermath. Meanwhile, Cece goes to an Indian singles event for those looking to get married and Schmidt goes as well to win her over.

We also cover how Schmidt learned some Hindi phrases as our “Schmidtism” this episode. For our “not in the 2020s” we discuss how Schmidt and the show reduce Cece to a sex object rather than her own person and Anu’s treatment of Winston. However, Winston’s response and Schmidt putting aside his selfishness for Cece (before he messes this up) are some of our “yes in the 2020s” moments. We also explore the careers of Kristian Kordula (Male Model) and Lara Shah (Indian Single), the guest stars we feature in this episode.

We also read this interview with the New Girl showrunners where they discussed how this episode had to be rewritten after the kiss in Cooler (the last episode) and how the idea of the marriage convention came from Hannah Simone. The interview also shares how Kobe Bryant showed up to watch the filming of this episode and some of his favorite jokes.