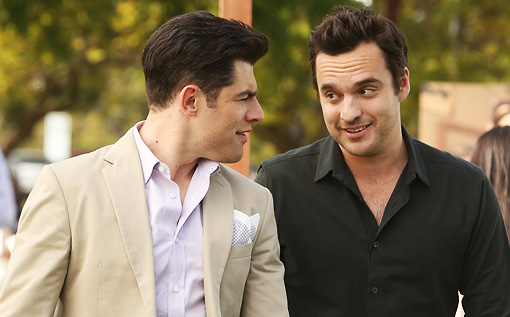 This podcast covers New Girl Season 2, Episode 18, Tinfinity, which originally aired on February 26, 2013 and was directed by Max Winkler and written by Kim Rosenstock and Josh Malmuth.

Schmidt and Nick are celebrating living together for 10 years, their tin anniversary. Meanwhile, Jess is trying to move on from thinking about Nick and his mouth and Cece is moving forward with Shivrang.

We also cover the moment when Schmidt assigns Nick his party chores as our “Schmidtism”. For our “Not in the 2020s” we discuss how Jess dismissed a man at the bar because he said he was bisexual and Nick calling Schmidt a “nancy boy” for spitting out his alcohol. We also talk about how Jax addresses the expectations set on him and opening up was a “Yes in the 2020s”. We also give a quick look into Steve Howey (Jax) and Satya Bhabha (Shivrang), the Guest Stars we feature in this episode.

We also discuss this article (which contains spoilers) where we learned that this episode took almost a month to film (compared to the usual 5 days) due to rain and how Elizabeth Meriweather found episodes where Jess was the b-plot to be weaker episodes. We also chat about the different anniversary themes for each year.

Thanks for listening and stay tuned for Episode 19!