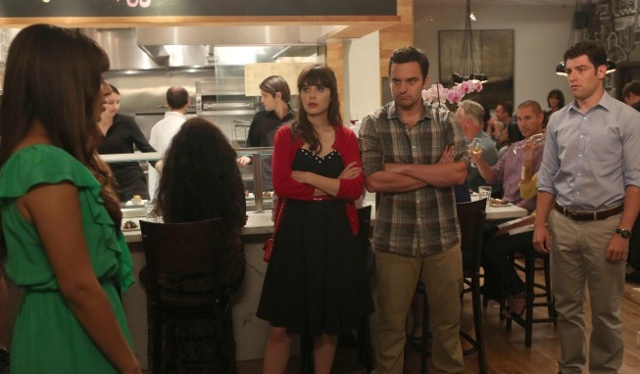 This podcast covers New Girl Season 3, Episode 3, Double Date, which originally aired on October 1, 2013 and was written by Luvh Rakhe and directed by Max Winkler.

Nick, Jess, Cece, and Schmidt decide to go on a double date! However, Cece’s concerned by Schmidt’s weird behavior and it’s not long until Schmidt’s truth comes out. Winston doesn’t want to feel left out and tries to secure a reservation for the Double Date +1.

This episode we discuss who would be more likely to go early and claim a table for friends, barter badly for a reservation, smush a pie in someone’s face, and dance during a tense conversation. We also cover the honorary “Schmidtism” of Schmidt thinking Nick cracked his email password and when he was flustered about going on a double date with Cece, Jess, and Nick. For “Not in the 2020s” we talk about everything Schmidt did in this episode and for our “Yes in the 2020s” we discuss Cece calling Elizabeth. We also give a brief look into Alice Wetterlund (Hostess), our guest star of the episode.

We did a deep dive into the different cars that Nick has driven so far and shared an article of how someone felt Winston’s scenes were shot separately (the article does contain spoilers). In addition, we also talk about this article that compared Schmidt’s evil-ness to Walter White from Breaking Bad. Neither of us found the bear in this episode.

This episode got a 6.5/10 rating from both Kritika and Kelly and both had the same favorite character: Nick!