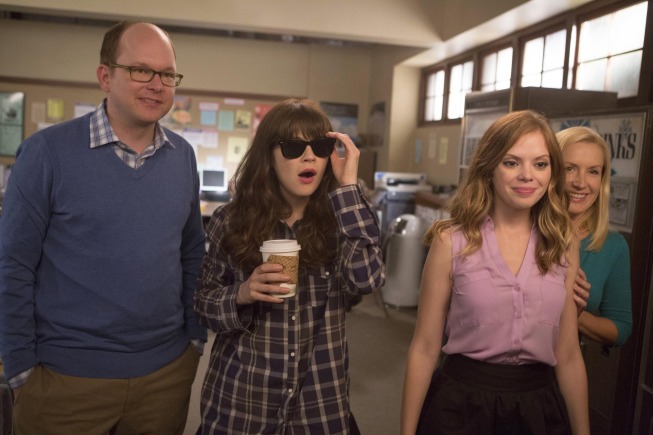 This podcast covers New Girl Season 3, Episode 2, Nerd, which originally aired on September 24, 2013 and was written by Kay Cannon and directed by Fred Goss.

Jess doesn’t fit in with the teachers at her new school so Nick comes to the rescue! Schmidt spends the episode trying to balance his relationship with Cece and Elizabeth while his coworker Beth tries to sabotage it and Winston watches Daisy’s cat, Ferguson.

On our new section of our podcast called “Most Likely To” we discussed who we think would be most likely to be like Beth, steal their partner’s cat, commit a crime to fit in, and sneak into their boss’s hot tub but not get caught. We also covered when Schmidt went to go see Cece to uninvite her from his work party as our “Schmidtism” this episode. For “Not in the 2020s” we highlighted the way Elizabeth spoke about people from Hong Kong and Dr. Foster forcing Nick and Jess into his hot tub. Our “Yes in the 2020s” included Winston standing up for himself and Nick helping Jess get new friends. We also explored the careers of Dreama Walker (Molly), Mark Proksch (Dan), and Angela Kinsey (Rose), the guest stars of the episode. We also mentioned this article about Mark pranking the news as a “yo-yo master”.

We didn’t find the bear this episode but we did discuss how Schmidt being a Sagittarius but having a January birthday didn’t match and an AV club article that mentioned the belief that less lines were ad-libbed in this season.

This episode got a 7/10 rating from Kritika and an 8.5/10 from Kelly and we both had the same favorite character: Nick!

Thanks for listening and stay tuned for Episode 3!