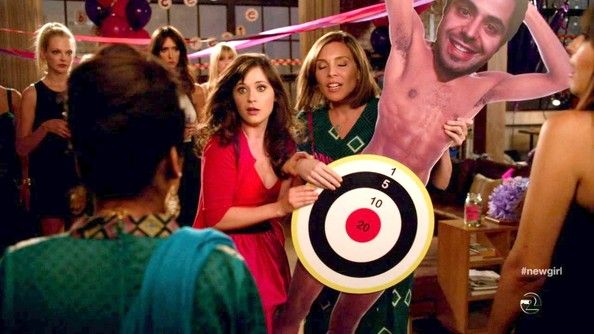 This podcast covers New Girl Season 2, Episode 22, Bachelorette Party, which originally aired on April 9, 2013 and was directed by Matt Sohn and written by Kay Cannon and Sophia Lear.

After the loft receives their wedding invites and finds out that Cece’s wedding is in 3 weeks, Jess plans Cece her “perfect” bachelorette party. Meanwhile, Schmidt goes looking for a girlfriend to bring a plus one to Cece’s wedding.

We also cover Schmidt explaining why he goes to Booty Burn Bootcamp as our “Schmidtism” this episode. For our “Not in the 2020s” we discuss Schmidt and Elizabeth’s relationship, how Nick and Winston tried to get a picture of Shivrang’s penis, Schmidt demanding a +1, and Schmidt thinking women are supposed to want commitment. For our “Yes in the 2020s” we highlight Schmidt apologizing to Cece. We also give a brief look into Merritt Wever (Elizabeth), the Guest Star we feature in this episode.

In this podcast, we call out a few camera goofs like how you see Jess say “Not Now Alfredo” but don’t actually hear her speak (around 13:20) and how when Schmidt knocks on Elizabeth’s door, it was never closed (around 15:50). We also share this article (which contains spoilers) where we learned that Elizabeth serves as a foil for Cece because Elizabeth tries to make Schmidt a better guy. Elizabeth Meriwether also mentions the inspiration for the idea of the “dead dad pass.”

Thanks for listening and stay tuned for Episode 23!