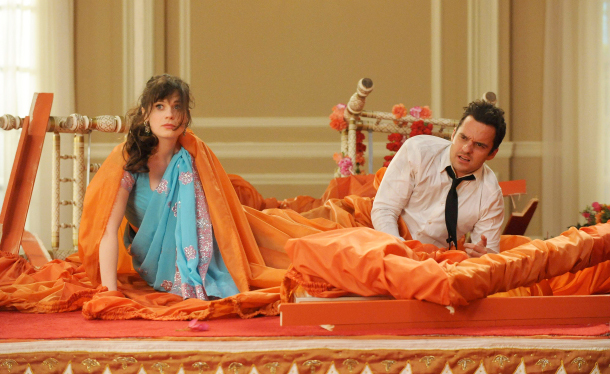 This podcast covers New Girl Season 2, Episode 25, Elaine’s Big Day, which originally aired on May 14, 2013 and was directed by Jake Kasdan and written by Christian Magalhaes and Robert Snow.

Cece is getting married! … Or is she? Schmidt and Winston end up pranking Cece’s wedding but it ultimately ends up being Shivrang and Elaine’s “Big Day”. Meanwhile, Jess and Nick continue to explore their relationship.

We also cover the moment where Schmidt tells Nick and Winston about Cece talking to him with her eyes as our “Schmidtism” this episode. In our “Not in the 2020s” we discuss how it is a bad idea to crawl into an air duct with a badger, but also when Nick comments about Winston having a “girl butt”. In our “Yes in the 2020s” we share how we loved the interaction between Cece and Elizabeth in this episode and how neither were catty. We also give a quick look into Taylor Swift (Elaine) and Ajay Mehta (the priest), the Guest Stars we feature in this episode.

We also share this article (which contains spoilers) where we learned that the writers originally wrote Nelson Franklin (Robby) a part in the finale but had to take it out because of time and that this was a big, group-written episode.

This episode got an 8.5/10 rating from both Kritika and Kelly; Kritika’s favorite character was Winston and Kelly’s favorite was Nick.

Thanks for listening and stay tuned for Season 2 Recap!